So far it looks like the new online store is working well, but I have had two people mention that the shipping calculator gave them very weird (read: very high) results. If that happens, please let me know and I’ll sort it out.

I’m sorry for any mixups!

After a decade of only taking orders via email, the Forge of ice online store is open!

And, since it’s Cyber Monday, it’s time to have my very first sale – ever! If you enter the coupon code CYBERMONDAY at check-out, you can get 10% off your entire order. The code is good through Friday.

I’ve also got the long-awaited Dragon Turtle for sale! You can check that model out at the link, along with the rest of my current catalog: 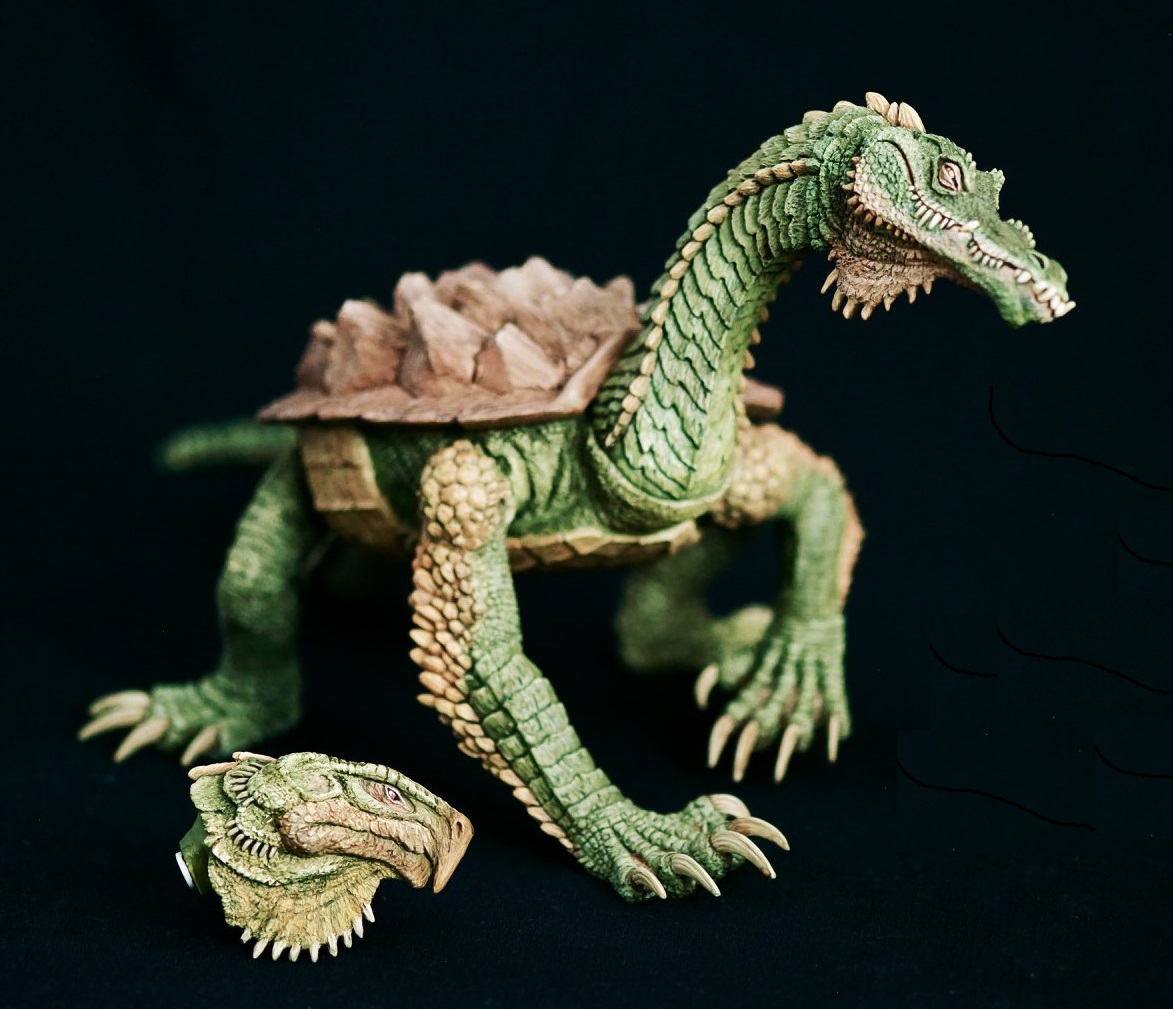 I’ve posted these to the Kickstarter page and to social media, so it occurs to me that I should share them here as well – here are some sample pages from the long overdue Eye of the Cyclops game book, the contents of the Cult of the Eye’s treasure vault.

This is of course not all of the strange and valuable items that are hoarded by the cult, but these are the items that are locked in their vault at the time of the adventure (assuming that the players don’t harass the cult into taking some of them out to use against our heroes!)

You’ve found your way to the Forge of Ice website… which I do not currently use. The best and fastest way to get ahold of me is though the Forge of Ice Facebook page – www.facebook.com/forgeofice or you can also find me on Instagram or Twitter.

I’ve been meaning to get the site working and useful for like ten years now, and… it’s still not there. One of these days I’ll figure it out (or hire someone to set it up for me), but, at least for now, social media is where my main presence is.

There is no online store -if you’re in the UK or EU and would like to order something, check out the Forge of Ice section on the Fenris Games website at:

Otherwise shoot me a message on Facebook and I can get the order sorted out there.

So, it’s the end of the year! Time for one of those “here’s the state of and near-future plans of Forge of Ice” posts.

I think this is where you usually say “BIG THINGS ARE COMING IN 2020!”, and, there are (big as in Dragon Turtle sized!), but the immediate priority is finishing the long-overdue Cyclops book & Kickstarter fulfillment.

Good progress is happening with it. I advertised it in the KS as being a 30-page booklet, but the manuscript is currently significantly longer than that. I’m not sure what final page count it’s going to land at, but it’s gonna be more than 30.

After the Cyclops KS is finished, then the Dragon Turtle is gonna happen. Unlike the Cyclops book, it’s finished. Everything is done, and stretch goals are going to be kept to a minimum – I’ve learned my lesson there. Fulfillment will be on a much more realistic time scale, too, with any stretch goals (a couple of additional head sculpts) explicitly adding to the fulfillment time frame.

After that… man, there are a zillion things I want to do. I’ve got those Queen and the Princess sculpts for the royal court of Zor-Al set. The sculpts were done in early 2017! I’m not sure when that set’s ever going to happen at this point. I don’t want to leave those beautiful Kev White sculpts forever unreleased, but I’m not doing another KS for a set of minis with a booklet until the writing & maps are completely finished ever again – the Cyclops set has been a series of lessons learned. I’ve also had the outline written for a similar-sized set for my the Azoran ape-men for years. The Histath snake-men, too. “Demon Servants of the Ape God” and “Lost Tombs of the Serpent Kings” will happen someday, but at this point they’re far beyond the horizon.

I’d also like to do some fantasy figures that are separate from my Pulp Sword and Sorcery/Lost World stuff (the Dragon Turtle will be the first of those), but other than a few sketches those plans are currently nebulous. If the Dragon Turtle does well, I have a few ideas for another premium giant monster, and that’s definitely a fantasy thing, not a Pulp or Lost World critter.

So that’s about where things are at right now. I’m optimistic for 2020. Finishing up the Cyclops project is the ONLY priority at the moment. Once that’s done, then the Dragon Turtle. After that… I dunno. I might take a step back and reassess and reorganize a bit.

I hope everyone is having a safe and fun New Years Eve, and I look forward to having an excellent 2020!

The Sirrush is the largest predator in Azor. They are the Azoran Dragons, the undisputed apex predator of the land. Some of the largest crocodiles might mass nearly as much, and some of the longest snakes might be a bit longer, but nothing can match them for ferocity and toughness.

Sirrush are primarily fish eaters, their favorite food being the huge catfish that teem in the shallow waterways and slow rivers. They are most commonly seen lounging on riverbanks, their necks stretched out, resting on low-hanging branches, looking for fish to reach down and snatch. However, they are able and indiscriminate hunters, not limited to riparian environs. Juvenile individuals in particular can be found almost anywhere, and are known for trying to eat anything smaller than themselves. Fully grown adults are just as likely to scavenge carrion or steal kills from other predators (including juvenile Sirrush) as they are to hunt. Even the notoriously belligerent Skull Pigs will reluctantly surrender a kill to a hungry Azoran Dragon.

Sirrush have specialized scales covering their necks. These scales have a slightly metallic sheen, almost like fish scales, and can be flared out a bit when the animal is agitated. They also use those scales to break up the shadow of their neck when they are fishing, fluttering or waving them to match the movement of nearby leaves. The neck scales also seem to play a role in courtship rituals, as a way for one Sirrush to display aggression or interest towards another.

Like some crocodiles, they make large nests out of piles of rotting leaves and other debris, laying their eggs in shallow dirt mounds before covering them with foliage. This is when Sirrush are at their most dangerous, as they will aggressively attack any creature, large or small, who approaches the egg mound. Females will protect and herd the young for several months after they hatch, after which time the juveniles will disperse. At a glance, these very young juveniles can be mistaken for long-legged monitor lizards, but as they grow their horns become more prominent, and their fearlessness and aggression distinctly mark their true heritage. Juveniles may stay in packs of 2-4 animals for several years, but as they get older they become increasingly territorial and solitary. Individuals reach maturity at about 15 years of age, and can live up to 100 years (although rarely more than 70).

Although adults are relatively rare, in theory Sirrush could be encountered anywhere in Azor. Territories of any adults near human settlements will be well known and avoided, and juveniles who cross human areas will be hunted and killed, if possible. A trio of horse-sized Sirrush juveniles are a threat to travelers and livestock, and experienced adventurers or soldiers could find themselves hired to hunt them down or drive them away. Adults guarding a nest would be a terrifying threat, and their tendency to cache food in a den means that there may occasionally be treasure to be found (anything non-edible carried by their victims). After nesting in a territory for 20 or 30 years, the amount of coin and metal might be significant, although heroes might need to spend a week excavating a lair to uncover and find it all.

As the title says, it occurs to me that I don’t update this website as often as I probably should.

I’m going to try to work on that.

Over the next few weeks and months I’ll be posting RPG-style “monster encyclopedia” entries for some of the creatures in my Azor setting. I’m posting them to the Forge of Ice Facebook page (which is where the bulk of my online presence resides), but I’ll post them here, too.

Heya folks – as you may have guessed, the Forge of Ice website here is still unfinished.

I am alive and above ground, and I apologize for the long silence.   Progress is still being made.

I’ll post something to the Cyclops Kickstarter page later this evening.

Live now on Kickstarter – the Eye of the Cyclops!  Game booklet and miniatures, a complete encounter set. 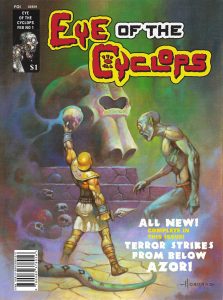 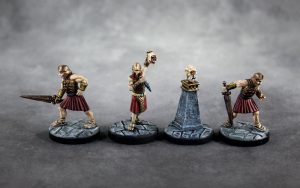 Well… I’m still slowly tinkering with getting the site fully operational, but, in the meantime, I wanted to share this.

Coming soon – The Eye of the Cyclops!  A system agnostic encounter set for RPG’s and tabletop skirmish games. 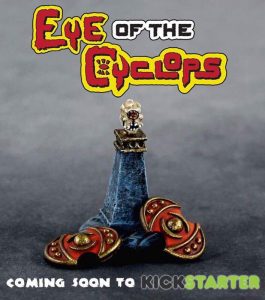